Well, I missed it yesterday, but September 28th was the anniversary of the Battle of Hastings in 1066, when William the Conqueror and the Normans attacked England and conquered King Harold, and then took over ruling England. He left his wife, Matilda, to rule his land in Normandy (in France) for him, and to take care of educating their ten children. But you have to put this in the context of the larger world the Normans lived in. 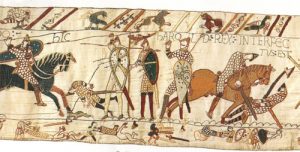 The Normans were descendants and relatives of the Vikings, who lived in Scandinavia, in what’s now Denmark, Sweden, Norway, and Finland. And the Vikings had been trading with the Mediterranean since at least the Bronze Age, when they sold amber and furs to the Egyptians in exchange for blue glass beads.

Egyptian glass beads in Denmark
Who were the Vikings?

The Vikings were traders

By the Early Middle Ages, the Vikings had a regular trade route that followed rivers southwest from the Baltic to the Caspian Sea and the Black Sea. They bought steel from the Sogdians in Central Asia, and brought it back to Europe. In northern Europe, blacksmiths made the steel into swords and sewing needles and other steel things.

A lot of Vikings fought for other people. They fought as mercenary soldiers in the Battle of Manzikert in what’s now Turkey in 1071 AD, and they fought for the Lombards in Italy.

What is a mercenary soldier?
The Battle of Manzikert
Who were the Lombards?

The Vikings were colonizers

The Vikings also sailed their ships west, and settled in Iceland, and then in Greenland. Some of them even tried to settle in Newfoundland, in North America. But Native people there defended their land and drove the Viking invaders away. In the Mediterranean, Normans conquered part of Greece, and South Italy, and Sicily. As part of the First Crusade, they conquered the East Mediterranean coast where Israel is now, including the cities of Jerusalem and Antioch.

The Normans were pretty well-traveled people who knew what was going on in other cultures all around the Mediterranean Sea. So we shouldn’t be too surprised that they knew what was fashionable in art too. After William the Conqueror conquered England, his half-brother Odo commissioned a big tapestry that showed the whole story of the battle as a sort of graphic novel. You can see the crucial battle at the top of this article.

Doesn’t it look a lot like this painting from an Arabic manuscript from a few years earlier? This tells the story of a Seljuk Turk battle, defeating the Persians in 1040, far away in what is now Iran.

Who were the Seljuks? 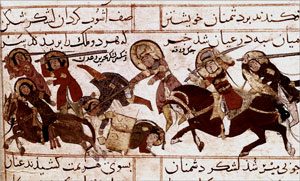