Afternoon at the Cloisters in NYC

I’ve been busy today touring the Cloisters museum in New York City, which is where a lot of the Metropolitan Museum’s medieval collection lives. It’s been a long time since I was there. We saw some great things, for sure! We saw a lot of interesting plants in their garden: a frankincense tree, a cinnamon tree, and a henna tree, just to name three.

Where does cinnamon come from?
The history of playing cards
When did backgammon get started?
Walrus ivory and the Tuniit

There’s a pack of playing cards from the 1400s, when playing cards were still pretty new in Europe. There’s some Islamic chess pieces. There are some European backgammon pieces made of walrus ivory that may have come from Native people in Greenland. 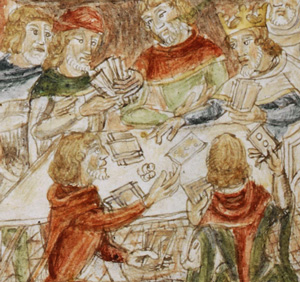 But in the whole museum, there was pretty much no acknowledgment that much of what was driving medieval European art was the culture of the Islamic Empire in SW Asia and North Africa and in Europe itself: in Sicily, south Italy, and southern Spain. Chess and playing cards both reached Europe from the Islamic world; playing cards were invented in China.

History of chess
Persian carpets
What is ivory? 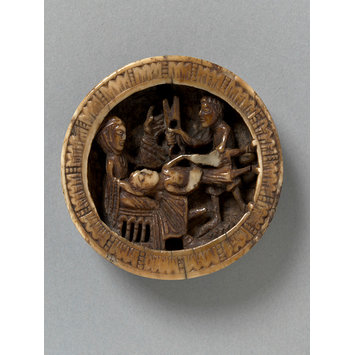 A backgammon piece made of walrus ivory

The Cloisters are full of beautiful woven tapestries with backgrounds of lots of little flowers, but there’s no mention of contemporary Persian carpets that also were covered with little flowers. Wouldn’t it be amazing to see one of the Met’s Persian carpets hung next to this tapestry? In celebrating the ivory carvings, maybe explain that medieval Europe’s elephant ivory comes from Africa, from Islamic camel caravans crossing the Sahara desert? 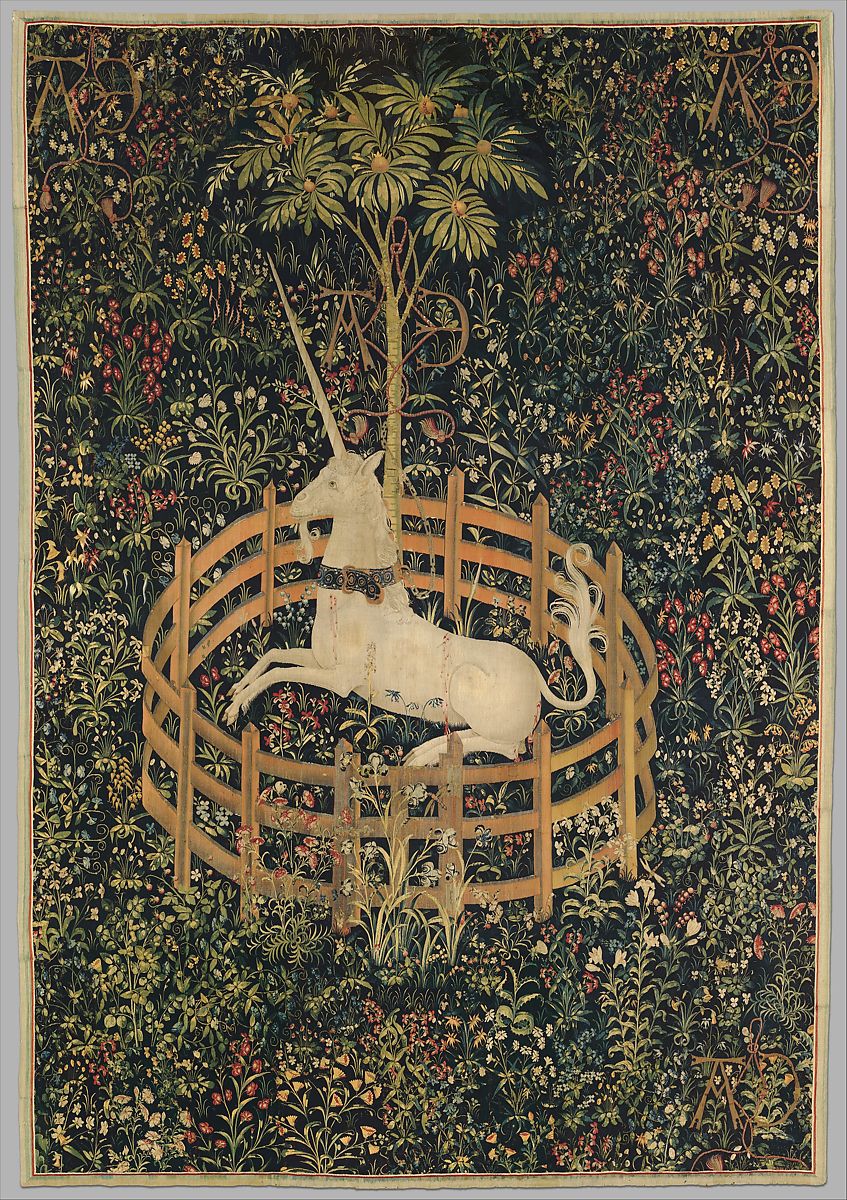 Unicorn tapestry in the Cloisters, NYC 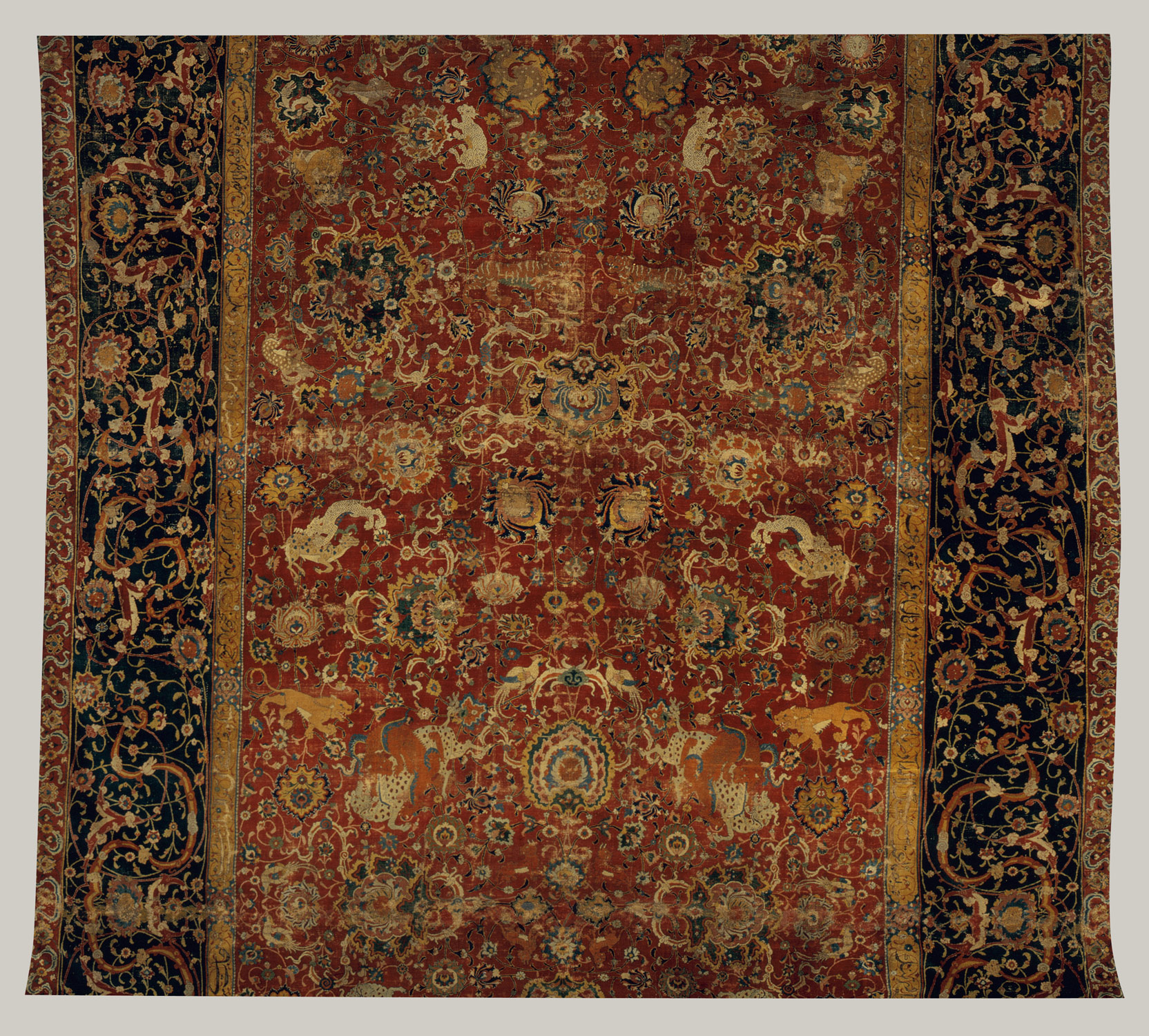 A Persian carpet made in the 1600s, now in the Metropolitan Museum, NYC

There were some lovely examples of medieval glass, but again no explanation of where the glass was made. Some medieval glass was actually made in Egypt and Syria, where they have the right kind of sand, using natron (a kind of salt) imported from Chad. Big blocks of glass were imported to Europe and then melted down and blown into glass cups and bowls. 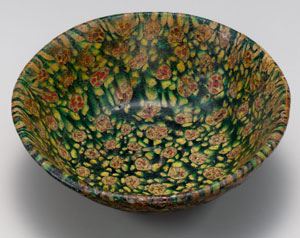 Other medieval glass – like these cups – was made in northern Europe. We sometimes call this “forest glass”. Northern Europe was just beginning to make its own glass in the Middle Ages. Shouldn’t this be explained?

These are medieval glass cups – they actually do stand up enough to keep from spilling, despite the bumps on the bottom

There were people at the museum from all over the world today. Wouldn’t it show New York City in a better light if its museums were able to acknowledge the contributions of all cultures to medieval art, rather than acting like everything was invented in Europe?