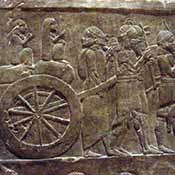 After the Dark Ages, by around 1000 BC, the Assyrians became the biggest power in West Asia, and they created many important works of art. The Assyrians continued the West Asian tradition of relief carving, and the Mesopotamian tradition of rounded forms, and continued to write over the surface of their stone carvings, and to represent their war victories, but they did it all in a much more organized and impressive style than earlier people had, and they used their art to frighten other people who were visiting their palaces.

Assyrian soldiers attack a town. Some are swimming, using balloons made of goatskins to hold themselves up. Palace of Ashurnasirpal II, Nimrud, 860 BC. See the walls and buildings of the town?

Later Assyrian kings made the same kind of impressive carvings to show their power in their own palaces: these are from Assurbanipal’s palace at Susa (they are now in the Louvre).

The left-hand picture shows a bull-man protective spirit who guarded the doorway to the king’s palace. It is very big, about twice as tall as a grown man. Can you see that the spirit has five feet? That is so it will look right from the side and also from the front. 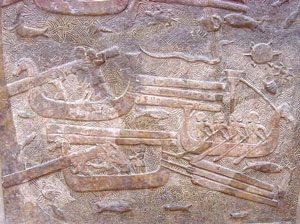 Floating cedars on the river to Assur

The right-hand picture shows boatmen bringing cedar logs from Lebanon down the Euphrates river to Susa for the Assyrian king; the designer wants you to see that the Assyrian king is so powerful that he rules all the way to Lebanon. Can you see the fish in the river?

In the 600s BC the Assyrian Empire collapsed and the Babylonians took over again. They wanted to show how traditional they were, and how they were restoring the past, and so they went back to using a lot of clay in their art.

You make this kind of decoration by making a lot of clay bricks in molds, glazing them in different colors, and putting them together in the right order to make a picture. It’s another guardian spirit like the Assyrian one above.