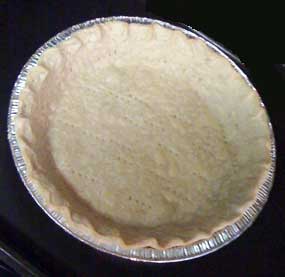 You can make a pie crust to go with your sweet potato pie or any other pie you make. All pies pretty much use the same recipe for the crust. For a basic pie crust, you’ll need a cup of flour and a third of a cup of butter. The wrapper on the butter will usually tell you where to cut for a third of a cup, but if not, it’s about two-thirds of a stick of butter. (To make a vegan pie crust, use margarine in place of the butter.)

Now put the flour in a bowl and put the butter in on top of it. Chop the butter and mix it with the flour. You can do this with a pastry cutter, or with two forks if you don’t have a pastry cutter. Keep chopping and mixing until the butter lumps are no bigger than green peas. It should be mostly sticking together; if it isn’t, add a spoonful of water at a time, but no more than three spoonfuls.

Pour out your pie dough into a pie pan and spread it gently with your fingers until it covers the whole pan, including the sides. You may need to pull some dough from one area to patch holes in another area. That’s it.