On this date, November 7th, 1811 AD, United States troops attacked the Native Shawnee to push the Shawnee people off of their traditional land in what is now Indiana. This was part of a larger movement westward. Before the American Revolutionary War, the British had prevented American colonists from moving west, trying to confine them to a narrow strip along the Atlantic coast that we now know as the thirteen original states.

One reason the Americans fought for independence – as they say openly in the Declaration of Independence – was that they wanted to force Native people off their land further west, so that landless colonists could settle there and own land themselves.

The framers of the Constitution made this seem even more urgent by deciding that only free men who owned land could vote, and then keeping most of the land for themselves and their friends. Thousands of free people who wanted to get political power saw that the only way they could hope to do that was to get some land of their own. 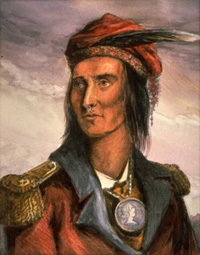 Once the United States had won the war, they quickly turned to fighting to get more land. As they crossed the Appalachian Mountains, they came to the land of the Shawnee. The Shawnee had been living there for, oh, probably at least several thousand years. They were originally Athabascans, related to the Algonquin and the Cree. They lived along the Ohio River valley, eating wild rice, and trading down the river to the Mississippi and on the Great Lakes to their Algonquin and Cree cousins. They bought pottery and small statues. They sold tobacco, and wampum made out of small purple and white shells, among other things. The Shawnee built big earth mounds and fortification walls.  They were farmers, growing corn and beans and squash, sunflowers, and tobacco. They lived cooperatively; their leaders could suggest and encourage actions, but did not force anyone to do anything.

The Shawnee before colonialism
Tecumseh and the Shawnee 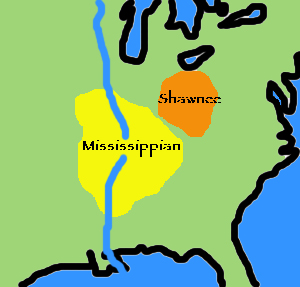 Where the Shawnee lived

When Europeans arrived, the Shawnee traded with them to get glass beads and iron tools. But by the time the American colonists were attacking them, the Shawnee were already much weaker than they had been before. Many of them had died of measles and smallpox. Traditional Native trade networks had been destroyed by French colonialism on the Mississippi and Spanish colonialism in the West. The Shawnee had taken the side of the British in the Revolutionary War, and so many Americans felt justified in attacking the Shawnee now.

What is measles?
And smallpox?

Their leader Tecumseh organized the Shawnee and other Native people to stand together resist the invasion. At first the alliance did pretty well. But then the United States army attacked them at Tippecanoe. With Tecumseh away, the Shawnee and their Native allies lost the battle. Tecumseh rallied them and allied with the British in the war of 1812, but he was killed in battle two years later. Eventually the Shawnee were forced to move to Texas, then Kansas, then to Oklahoma, where their descendants live today. Many Shawnee run casinos in Oklahoma now.

The point is, 1) the colonists’ desire for land was created by the attitudes of the Founders, who made land-owning seem like the only way to get political power. 2) the Shawnee were not a small band of hunter-gatherers, but settled, town-dwelling farmers who produced manufactured goods and commodity crops and transported them hundreds of miles over rivers and lakes to markets. 3) which they did very well apparently without any sort of coercive government.