The patriarchy is forgetful: when women do get into power, which happens pretty often, we often manage to convince ourselves that it’s the first time, over and over. Like Biden saying there had only been one black woman US senator – when there are currently two. We forget that many women ruled states and empires in antiquity and the middle ages, across the world and in all periods. Women rulers is not an untried and risky innovation at all. Nor is it at all weird for a woman of 70 or 75 to be trying to get power (hello, Elizabeth Warren!) We just need to fight this forgetfulness and see and remember and honor those women. 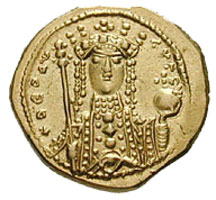 Today’s example is Theodora, who became sole empress on January 11, 1055 AD, when her co-ruler (her older sister Zoe) died. Zoe took power in 1025, when she was 47, as co-ruler with her  father Constantine VIII. When her father died in 1028, and she could rule alone, she was fifty.

Theodora tries to get into power

She ruled along with her husband Romanus for a few years. Theodora, also in her fifties, made a couple of attempts to get into power, but she didn’t succeed. In 1031, Zoe put a stop to that by exiling Theodora to a monastery on an island in the Black Sea. Three years later, Zoe apparently poisoned Romanus to get rid of him in 1034, and ruled alone. 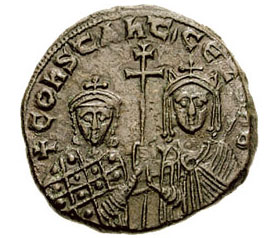 Then Zoe ruled along with her servant/lover Michael, making him co-emperor  as Michael IV. Michael died in 1041, and then Zoe adopted Michael’s nephew and co-ruled with him as Michael V. Theodora was still stuck on her island.

Predictably, Michael V almost immediately tried to get rid of Zoe, and get power into his own hands, but *the people* revolted at this. They demanded that Zoe bring Theodora back instead, and Zoe did it. Michael ended up sent to a monastery himself, and blinded into the bargain. Two months later, Zoe got married a third time, this time to Constantine IX.

Zoe, Theodora, and Constantine ruled together for eight years until Zoe died in 1050. Then Theodora seems to have decided it was safer to retire to a convent. So Constantine had all the power for five years.

When Constantine was on his deathbed in 1055, he tried to leave power to one of his generals. But Theodora – now 75 years old, swooped back in and seized her chance. She called a meeting of the Senate and the imperial guard confirmed her power just before Constantine died. She ruled alone for a year and a half, refusing to marry, until she died too. Her reign was all about promoting people of ability, regardless of their social class, and stopping powerful people from abusing the poor. 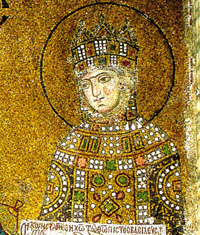 The Empress Zoe (from the church of Hagia Irene): Zoe looks young in her mosaic, but she must have been about 70 years old when she ordered them to make this mosaic portrait of her.

I’m particularly keen on Theodora and Zoe for two reasons: 1) they weren’t sexy young girls, but middle-aged women. And 2) they behaved just like other ambitious rulers, fighting with each other, exiling each other, etc. Women don’t have to be perfect, or beautiful, in order to hold power, any more than men do. We just have to try to remember them, and our own capacity to rule.