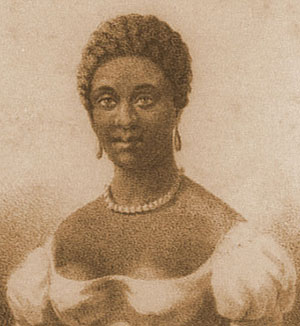 She was born free in Africa, probably in West Africa. When she was seven years old, she was kidnapped away from her family and sold into slavery. She came to the East Coast of north America on a slave ship. While she was a slave, she built a reputation as a poet. She visited London, and met George Washington.

When her enslaver died, Phyllis was twenty-five years old. She was freed. But because of racism, she and her husband found it difficult to earn their own living. They fell into poverty, and she died young.

Here’s one of her poems:

Twas mercy brought me from my Pagan land,
Taught my benighted soul to understand
That there’s a God, that there’s a Saviour too:
Once I redemption neither sought nor knew.
Some view our sable [black] race with scornful eye,
“Their colour is a diabolic dye.”
Remember, Christians, Negroes, black as Cain,
May be refin’d, and join th’ angelic train.