So, okay, maybe a small frenzy, because only a limited number of people are interested in the National Latin Exam, but if you are, this is what’s been going on:

Slavery in the Roman world
Women in ancient Rome

3. Yesterday, people on Twitter posted images of newsgroup comments (from a high school Latin teacher) making it clear that at least some people at the National Latin Exam viewed these changes as annoying and wrong. They said they had only made the changes in response to pressure, and wow was this a nuisance. Apparently they don’t understand – or don’t want to understand – that the problem isn’t showing slavery, but misrepresenting slavery to make it seem like a pretty good deal for the enslaved people. 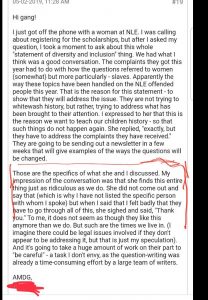 4. Now Classics professors are wondering whether the National Latin Exam’s position on diversity is fake? not sincere? Maybe this would be a great time for them to clarify what this post means, and where they stand.

5. Just to be clear, one of the core reasons why I write and maintain Quatr.us Study Guides is to fight racism and sexism in history. This episode shows why that’s so important.